August in the Northeast makes me think of Jersey Tomatoes and Sweet delicious corn…but did you know peppers are in season too? Cubanelle peppers for instance are yellow-green to red in color and have a sweet, mild flesh. These peppers are popular for frying and sautéing. Long Hot Peppers also in season right now will definitely heat things up, not only in your prepared dishes but also in your metabolism. According to a recent study capsaicin, a compound found in hot peppers can give dieters a little boost by increasing energy expenditure or heat production.  Peppers contain an excellent source of vitamin C as well as antioxidant compounds such as carotenoids and flavonoids.

Did you know? The heat produced by spices or foods is measured in “Scoville Heat Units” (SHU), which were originally created by Wilbur Scoville who pioneered the process for measuring the heat produced by a food or spice. Today this test is conducted using a liquid chromatographer. 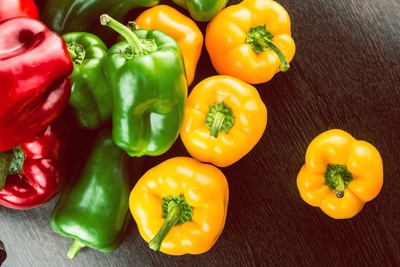 Grill peppers on medium-high, turning once, until soft and charred in spots, about 5 minutes per side. When cool enough to handle, chop the peppers; toss with olives, sun-dried tomatoes, oil, vinegar and salt in a large bowl.

Make ahead tip: Cover and refrigerate for us to 3 days.